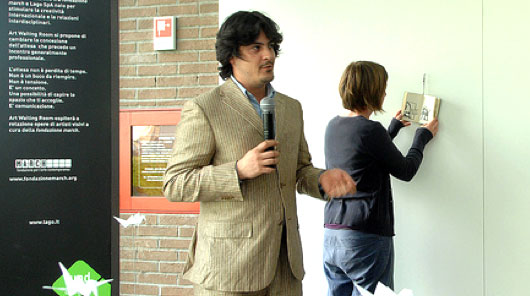 “Sound is everything. The first thing we hear in our mom’s belly. The last glimmer of consciousness just before we die. We don’t have eyelids for our ears. And toward any sound message, we are naked, without defence.”

The cross-curricular work of Dario Lazzaretto starts from a well defined group of themes which involves a relational practice and approach. These themes, mainly concerned with the social, political and cultural aspects of contemporary life, are used as the conceptual bases and as critical tools for the making of the art work.

Dario Lazzaretto develops its artistic operations starting from a problem solving-like method; his work could be defined a site-specific social analysis of the environment in which he finds himself working. His last production focuses in particular on sound art, which finds an apt counterpart and fulfillment with live performances, videos and installations. The core subject at the center of the latest and the oncoming works is that sound art could be considered as a narrative medium, not only a decorative pattern used to fill space and time.Sound is language, the primary transformative instance of man. Starting from this point, the sound used by Dario Lazzaretto in his works has an active and leading role; it is not only the audible part of an art piece, but it is the art work itself that lets the sound be visible. This kind of visibility is achieved through unveiling the inner causes of the sound itself, or by its glaring effects on the surrounding reality. Last but not least, another key point in Dario Lazzaretto’s works is the most hidden part of the art piece: the processing one. The process through which a performance or an installation is developed is almost always visible to the public. The inner relations that run from the conceptual project to its realization are integral part of the final outcome of the artwork. They could just be visible to the eye and to the ear, but also to the mind, as they could be simple logical concepts, or abstract thoughts. By unveiling the artistic procedure, the audience is charged with further responsibilities. The aim is to involve not only the aesthetic judgment – that is based primarily on eyesight and rapid glimpses– but to create a moral and ethic connection to the work.